On the west slope of the hill on which Thebes is built is the famous Dirce Spring, which plays a role in the myth of the founding of Thebes by Kadmos.

So, according to mythology, somewhere near there Cadmus sacrificed the cow that led him to Thiva and then went to look for water at the closest spring to make the offering to the dead. However, this spring was guarded by a dragon, a son of Aris. Kadmos killed it and sowed its teeth in the ground; these grew into the Spartans. Next to the spring there was a cave, which myths say was where the dragon lived.

The spring the dragon had guarded was later renamed the ‘Spring of Dirce’, because of another mythological episode connected with it. This was the murder of Dirce, wife of King Lykos of Thebes, who tortured Antiope, mother or Zethus and Amphion, who was kept as a prisoner in the palace. According to myth, after Dirce had been tortured to death by Zethus and Amphion, the two brothers threw her body into this spring, which then took her name.

According to the descriptions we have from Pausanias, somewhere nearby there there was a sanctuary of Athena Onca, from which the Oncian Gates in the walls of Thebes, which were located in this area, took their name. Ancient Thebans would also show the spot where Menoekeas, the son of Creon, fell from the walls, sacrificing himself to save Thebes, in accordance with the prophecy of the oracle at Teiresia, during the first campaign of the seven Argive heroes against Thebes. 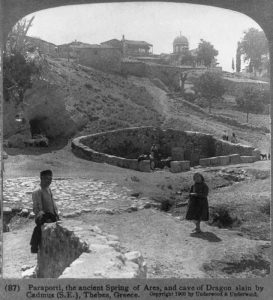 Do not miss yet